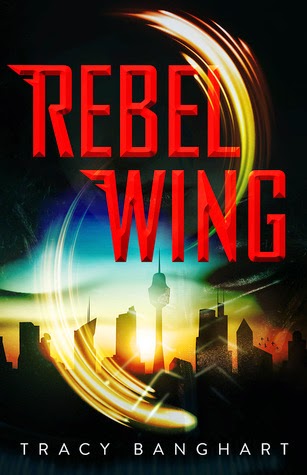 
The Dominion of Atalanta is at war. But for eighteen-year-old Aris, the fighting is nothing more than a distant nightmare, something she watches on news vids from the safety of her idyllic seaside town. Then her boyfriend, Calix, is drafted into the Military, and the nightmare becomes a dangerous reality.

Left behind, Aris has nothing to fill her days. Even flying her wingjet—the thing she loves most, aside from Calix—feels meaningless without him by her side. So when she’s recruited to be a pilot for an elite search-and-rescue unit, she leaps at the chance, hoping she’ll be stationed near Calix. But there’s a catch: She must disguise herself as a man named Aristos. There are no women in the Atalantan Military, and there never will be.

Aris gives up everything to find Calix: her home. Her family. Even her identity. But as the war rages on, Aris discovers she’s fighting for much more than her relationship. With each injured person she rescues and each violent battle she survives, Aris is becoming a true soldier—and the best flyer in the Atalantan Military. She’s determined to save her Dominion . . . or die trying.

This is a new release of the previously self-published title Shattered Veil.


I was in the middle of a Dystopian kick when I requested REBEL WING from NetGalley and I am so glad I found this new gem of a series. I weigh my decisions on what to read on not only the blurb and cover of the book but also Goodreads reviews and REBEL WING had all three in its favor (A new cover was recently revealed but this one was the one that was on the book I requested and I actually find it more appealing)!

There is two things Aris loves, flying and Calix. She has a happy life in their little town and soon her and Calix will start their engagement and she will continue to fly over her family's fields. When Calix is drafted into the military it throws her plans into a tailspin and when she is offered the chance to go to war with him as a pilot she jumps at the chance. The only problem? She's a girl and they only allow boys to be drafted so she has to disguise herself as a boy and no one can know what she's really doing.

I really enjoyed watching Aris grow as a character. The only reason she agrees to join the cause as a pilot is because she is promised she will be able to see Calix. Things don't really turn out the ways she expect though and she ends up growing a lot while fighting to find him.  Her beliefs in things change, her priorities change and eventually she turns into the person she never knew she was meant to be.

The secondary characters brought a lot to REBEL WING and I am excited to see them in future books. I'm especially excited to see Aris and Milek come back together (hopefully) in book 2. Their part of the story was left unfinished and I can't wait to see what ends up happening between them. The story itself did start out a bit slow. There is a lot of buildup until the action actually starts, but once it does things move along much faster. By the end of the book I just wanted more. It's super emotional and I had no problem feeling the emotions for the characters as they were feeling them. I am really excited about book 2 and I hope I dont have to wait a long time before it comes out.

* This book was provided free of charge from NetGalley in exchange for an honest review.
Posted by StacyUFI at 2:30 AM