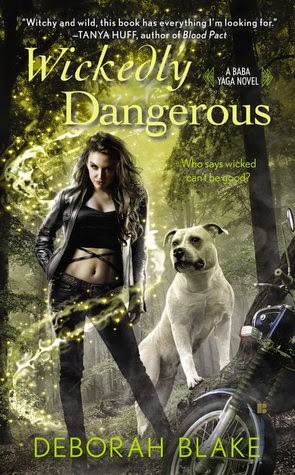 Older than she looks and powerful beyond measure, Barbara Yager no longer has much in common with the mortal life she left behind long ago. Posing as an herbalist and researcher, she travels the country with her faithful (mostly) dragon-turned-dog in an enchanted Airstream, fulfilling her duties as a Baba Yaga and avoiding any possibility of human attachment.

But when she is summoned to find a missing child, Barbara suddenly finds herself caught up in a web of deceit and an unexpected attraction to the charming but frustrating Sheriff Liam McClellan.

Now, as Barbara fights both human enemies and Otherworld creatures to save the lives of three innocent children, she discovers that her most difficult battle may be with her own heart…


Barbara is KICK BUTT. Although I'm not crazy about her name lol. She doesn't 'feel' like a Barbara, but I understand it goes with Baba Yaga so I will let it slide. Her dog, who's really a dragon, is pretty darn cool too. She is loyal to those she considers friends, she was confident in her position, and she did a great job of solving the mysteries she was presented with. She just had a great air about her and the legend of Baba Yaga kept me intrigued at every turn.

Barbara isn't quite used to bringing someone into her life, but it seems like Liam makes it easy. He gets under her skin and they just work together. He takes things pretty well and it's nice that their relationship grew slowly, it made it feel more real. I enjoyed both of the worlds that Deborah Blake presented to us. We have the modern world and the Otherworld. The characters spend time in both and both were well built.

The whole book was pretty darn enjoyable. I am a bit sad that book 2 won't follow Barbara and Liam, but I am still excited to see what Beka will bring to the series and I am hopeful that we will see Barbara and Liam again.