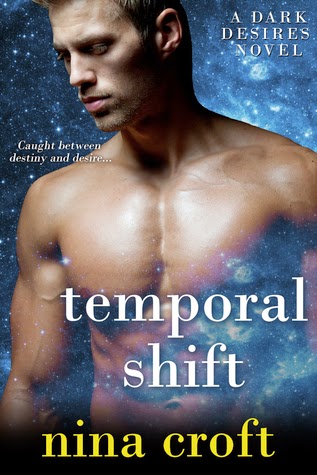 
Caught between destiny and desire...

After diving into a black hole in search of the source of Meridian, the key to immortality, the crew of the Blood Hunter finds themselves stranded in an alternate universe.

Engineer Devlin Stark doesn't want immortality. He just wants to live long enough to get his revenge on the man who murdered his brother. Now, he's trapped in a strange world with a crazy woman who claims he's fated to be her lover.

Saffira Lourdes has a destiny: to save humanity and lead her exiled people to the Promised Land. Haunted by visions of the past and future, she's been sustained through the years by a dream lover. Unfortunately, Devlin doesn't believe in fate. But it's obvious there's a connection between them, one that will soon be tested by the limits of time and space. Saffira is about to make the crew of the Blood Hunter an offer they'll find impossible to refuse.

They're heading back to Earth, and they're going back in time...


First off, I have to address the fact that this is part of a series. I have seen mention that this can be read as a stand alone, but I have to say you will definitely feel like you 'missed' something if you read it without reading the previous books.  All character and world development was done in previous books and the current characters all have past stories you need to know to understand them and their connections to each other. I'm not quite sure why the series name seems to have changed (from Blood Hunter to Dark Desires? according to the book cover). Kinda threw me off at first, but rest assured you won't be disappointed going back to book 1, BREAK OUT, if you want to read TEMPORAL SHIFT and have not done so yet.

We recently met Devlin Stark in DEATH DEFYING so although we have a bit of an understanding of him, we don't KNOW him. He has a lot of anger piled up inside of him and kinda acts like a 'donkey' for most of the book, but we get glimpses of who he could really be as he defrosts in the process of falling for Saffira. Saffira is a new character for us. She grew up being told that she would save her people and she takes the position very seriously. She's very naive and inexperienced until events take her back in time then into the future. I know, kinda confusing, but you will understand once you read it.

Saffira has dreamed about Devlin for as long as she can remember and can't wait to bring her visions into reality. Devlin is NOT looking for a relationship and when Saffira tells him about seeing them together all he thinks about is bedding her and moving on. Ther relationship wasn't an enchanted romance, but by the end they are both on the same page and both fit well together.

TEMPORAL SHIFT was a fast paced edition to the series. It was great to see the cast of characters after they went through the black hole and I look forward to seeing what happens to them now that they are back on the other side. I have an idea of who one of the main characters might be in the next book and am excited to see if I am right, it's definitely their time to shine.