Review: Christmas with a Bite by Patricia A. Wolf 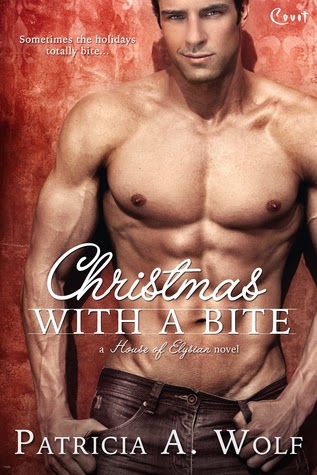 This Christmas, Mara Livingston is determined to start over. But as she's driving to her "new" home, a freak winter storm forces her off the road. Now she's stranded in the middle of nowhere. Then he shows up. And there's something strangely familiar about him...

Connor Reece never expected to see Mara again. Nor is he prepared for the onslaught of emotions―including an unimaginable rush of desire―she stirs within him. Now he has a chance to claim the woman he's always wanted. Except, there are a couple of small details that Mara doesn't know. The first is that Connor is a vampire. And the second is that if his family finds out about Mara, she will most certainly be killed...


Mara is ready for a new start after she finalizes her divorce from her cheating husband. She becomes stranded during a snow storm and finds her way to a remote cabin. The man that lies there looks familiar, but she can't place him and she is thankful for his help. Connor is hiding away after the suicide death of his girlfriend. Mara, the woman he hasn't forgotten from one dance at his best friends brothers wedding many years ago, is the very last person he expects to show up on his doorstep. He still wants her, but has no choice but to keep her at arms length. That plan doesn't work as well as he wants it to.

The whole story is about how Mara and Connor are fated to be together. They went their separate ways, but found there way back to each other anyways. I enjoyed all the characters in this book. When it first started I thought it might be only Mara and Connor stuck in a cabin, falling in love and I am glad to say it was so much more than that. We get to meet friends and family and they are all involved in the overall storyline.  Mara has a really hard time trusting men after her ex husband and Connor has a secret he can't share with her, so its obvious that there was going to be a problem at some point. I really enjoyed how Mara found out about Connor being a vampire. For one, it wasn't expected and two, I think she handled it how I would have handled it if I was in her position. The romance and relationship developed nicely and it was easy to become invested in it's outcome.

I don't see anything that suggests CHRISTMAS WITH A BITE will be part of a series and that is totally OK because I was happy at the end and don't really have a huge pull to read more about Mara and Connor. Their story ended well and I am fine with it being kept that way. This was a nice fast paced, easy romance for those looking for one.