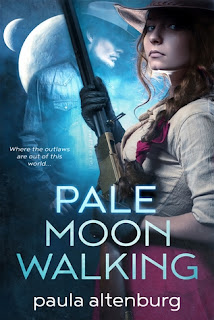 
The wild west meets aliens in PALE MOON WALKING. PALE MOON WALKING takes place in the wild west era and I wasn't really expecting that for some reason so it was a surprise. I didn't think I was going to be able to fully enjoy it because I usually enjoy a more present day read, but I did end up liking the story.

Libby is the sheriff of Coyote Bluff and happens to be the daughter of the late leader of a gang of outlaws. She is extremely independent and knows how to handle a gun. There are a lot of former gang members that have made their home in Coyote Bluff so when a US Marshall comes to town she assumes he's up to no good. Sam is of course a US Marshal, but he is on a leave of sorts. He happens to make his new home in Coyote Bluff, but things quickly take a turn towards the dangerous side when he is attacked by aliens then is saved by the beautiful sheriff that dresses like a man, but he sees her as only a woman he wants to get to know.

The romance between Sam and Libby was fun. Libby is more of a spinster and Sam wants more. They both surprise each other throughout the book and are pretty hot together. Libby has a lot of soul searching to decide if she could live without Sam and I enjoyed being in her head as the story evolved.

I had a few small issues with PALE MOON WALKING. There are a lot of characters introduced and for some reason I had a hard time keeping some of them straight. I thought that the author dropped the ball on explaining some things about the world which made things a little hard to understand and made me feel like I missed something. Also, I didn't feel like the end cleared everything up. I am not sure if this will be part of a series, if so, then it wouldn't be that big of an issue. If it isn't part of a series I am left with a lot of questions and a feeling of being incomplete.