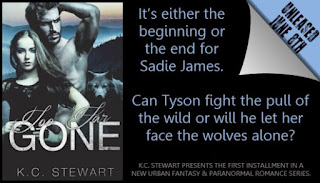 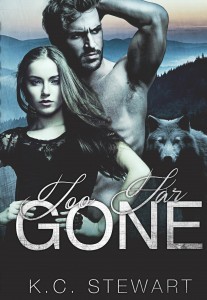 
It’s either the beginning or the end for Sadie James. She came to the small Adirondack town of Andora looking for a fresh start. One that didn’t include the pitying looks of strangers who saw her on the news. Only days into her new life and already she is in trouble. That is, unless the wolf in front of her was salivating at the sight of some other woman in the vast forest around her.

After killing his sister, Tyson searched for oblivion the only way he knew how to. As a wolf he could run from the life he left behind and become the animal he always was. The time between lucidness grows longer each times he surfaces. One day he won’t be able to come back at all. It was the only thing he looked forward to until a lost woman fell at his feet.
Sadie is in danger and she is blind to it. Although, it was never proven, Tyson always believed Jack was behind his sister’s ultimate demise. Now Jack has his sights set on Sadie. Can he fight the pull of the wild or will he let her face the wolves alone?


TOO FAR GONE was the first book I have read from author K.C. Stewart. There were a few slow points, but I really enjoyed the characters and storyline.

We get two POVs in TOO FAR GONE. First we have Sadie. She moved to the town of Adirondack to get away from her past. She couldn't get that with her family and friends treating her like she was super fragile. Second is Tyson. He was forced to kill his sister and that broke him. He has stayed in wolf form and plans to stay that way forever. Although I liked that we got to experience the story from two different directions, I wasn't crazy about them being separated the way they were. I would have rather had the events happen back to back or experience the happenings from just one or the other instead of having the first half of the book from Sadie and then have to experience EVERYTHING again in the second half from Tyson's POV. OK maybe you don't have to experience everything, but it's a lot of the same events.

Back to the characters. Both characters were damaged in some way and were able to help each other heal. There was no romantic relationship until the end of TOO FAR GONE, but I still felt that they were a really good match and had a solid base for their relationship and future. The supporting cast of characters was strong and I really liked that I felt connected to them as well and that I'm invested in seeing how they end up in the future too.

Besides a few slow parts I enjoyed the pace of the story. There were plenty of little things thrown in to throw you off and I liked that I couldn't guess what was going to happen every turn. After I finished reading TOO FAR GONE, I was craving more and I made the mistake of reading an excerpt for the next book and I'm now itching to get my hands on it. I will definitely be picking it up.

I gave it 3.5/5 stars
* This book was provided free of charge from Pure Textuality PR in exchange for an honest review.
Posted by StacyUFI at 3:00 AM