UFI welcomes Author K. Margaret. Thanks for Joining us!!

What you might not know about me is I work for a closing attorney firm for my day job. I’ve been in the real estate field for almost twenty years and I think one day I need to write about all the crazy things one can witness at a closing table.

In my down time I’m either reading or watching football, and if it isn’t football season I’m watching ESPN or the NFL Network. Lately, I’ve been teaching my sixteen year old how to drive. Not sure I can consider that down time since there isn’t a lot of relaxing involved!

My favorite part of writing is research. I never thought I’d ever say that, and my high school teachers would probably smirk at me if they ever heard me say it. I love getting to explore history, mythology, and even the meanings behind the names of my characters. While writing Dare to Dream, I got to explore Santa Fe, NM and its rich history. I learn something new every time I sit down at the keyboard.

The only thing that is a must when I write, is coffee. I go through several pots while I write. I have a coffee maker in the kitchen, my office, and soon I’ll have one in my bedroom. That way, it’s never too far away. You might say I have a just a small addiction.

How would you pitch Dare to Dream to someone who has not heard of it before?

It’s a story about strength and resilience, but most of all it shows if you open your heart and your mind, you can achieve anything.

Can you tell us a little bit about the world that the Dark Dream Series is set in?

The Dare to Dream Series is filled with shifters, slayers (a group of all female immortal warriors), demons, demoniods, gods and witches. While most of the books will take place on the mortal realms, in cities we’ve heard of, the reader also gets to travel to Mt. Olympus, Gehenna, and other realms inspired by mythology.

Do you have a favorite scene in Dare to Dream?

My favorite scene in Dare to Dream is the first interaction with Nellie and Nathaniel in present day. I love watching the two of them interact together; you can tell they’re best friends and they’ve known each other forever. Nellie refuses to take his crap, but Nathaniel doesn’t care and continues to poke at her. When Nellie tells Nathaniel about a possible ghost encounter she’s had, Nathaniel’s first reaction is to do a thorough pat-down of Nellie, just to make sure she hasn’t been possessed. Nellie is not impressed.

Empusa. Since the first moment I started to write this demoness, she instantly became my favorite. She’s cold-hearted, arrogant, sarcastic, but she is who she is and she doesn’t apologize for it. I never quite know what she’s up to, but I know I’m in for a ride whatever it might be. There is a saying when it comes to Empusa: What would Empusa do? Whatever the hell she wants. (and it’s true).
Krael is the character I have the hardest time breaking through the barrier he’s put up. He’s incredibly stubborn and tight lipped. I know he’ll open up to me when he’s ready, or I’ll have to break out the flamethrower and threaten him with it.

What Other Projects can we look forward to reading from you?
I am currently over halfway through writing the first draft of Dreams in the Dark, which is the second book in the Dark Dreams Series. I’m also editing Endless Nightmare: The Origin of a Demon, which is the origin story of Empusa. Readers will get to see why the demoness is the way she is and how she managed to get herself imprisoned in Gehenna. Both of which will be out in 2016.
__________________________________

K. Margaret is a paranormal romance author living in Georgia. Her love for words, storytelling, and mythology started as a teenager and continues to grow. When she isn’t sucking down pots of coffee and writing, or hanging out with her teenage daughter, she can usually be found in front of her TV watching football, her other obsession. 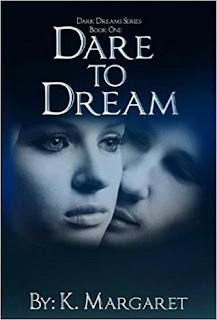 
Nellie O’Malley has spent her afterlife hunting and killing demonoids. As a slayer she never faced one she couldn’t destroy, until now.

The hunter has become the hunted.

A nameless, faceless enemy stalks her every move. Nellie must find a way to stop the unstoppable before it kills her, or worse, goes after the one person she can’t live without.

He is her best friend, she is his soul.

Nathaniel Ogapoge has been in love with only one woman. Unfortunately, she sees him only as her best friend. With her life now in peril, he will stop at nothing to protect her. Even if it means putting himself in the direct path of evil and risking everything.

“It is time for another,” Renata, the Queen of the Damned, announced as she straightened the flowing silk material of her silver gown so it draped perfectly around her. Perched on the edge of a reflecting pool high up in her tower in the middle of Gehenna, she glided her fingers over the surface of the water. The rippling effect caused the face of a young blonde female to come into focus. “She will be my newest creation and she will be perfect.”
Glancing away from the reflection, she peered up at Berith, Gehenna’s warden, who stood opposite her, hands tucked into the front pockets of his jeans. His perpetual scowl present across his chiseled face, Berith’s eerily-glowing orange eyes narrowed on her with annoyance. Not that she gave him her full attention, her thoughts were still lost in the vision appearing in the water. She didn’t particularly care he was even in the room.
“Have you lost your bloody mind?” Berith questioned. “I mean look at her. She doesn’t look old enough to know how to use the rifle she’s holding, let alone be able to kill demonoids. Is this what you are left with then? Is this where your abilities have taken you? You now recruit scrawny females to do your bidding?”
Renata raised a brow, watching Berith jab an accusing finger at the girl’s reflection. Too many years had passed since she’d last been given a slayer, and at the moment she didn’t need to hear Berith’s opinion on the matter. While her husband, Buer, was in charge of capturing and keeping the deadliest of demons within the confines of Gehenna, it was her duty to keep reign on the demonoids.
Two types of demons inhabited in the world: the ones born that way and the ones who were turned into such. The most dangerous, however, were the ones created. Those creatures were known as demonoids.
Demonoids were contrived from the darkest of all human souls. Ones so beyond redemption their evil called to certain gods and demons. These gods and demons would feed on those souls, transforming what once was a man into the deadliest and most nefarious of creatures. The job of her slayers was to eradicate them; to make sure no demonoid remained on the mortal realm or any other.
Renata dismissed Berith’s comments with a flip of her strawberry blonde hair. “You know as well as I do I have no choice in who is brought to me. At this point, I would take a ten-year-old girl with bowed legs if that was my only choice. I haven’t received a soldier in over a century and my troops on the mortal realm are dwindling.” She glanced back down at the image in the water. Yes, the female was young and not the usual soul given to her, but she would make do. All her slayers were chosen for a reason and Renata would not question the decision. All she concerned herself with was whether her new slayer would be strong enough to kill the demonoids when they came at her.
The female about to become Renata’s newest slayer was not a warrior or a soldier as she was accustomed to. Those females were easy to convince to take on the duty of a slayer.
No, this female never fought a day in her life, but as soon as the breath left her body and her heart stopped beating, the contract of services would already be signed. She would belong to Renata until the day the Queen of the Damned decided to release her of her duties. As of present, not one of Renata’s slayers relinquished her duties.
However, the job of her slayers came with its benefits. Renata bestowed one power upon them. A power already lying dormant inside them. Upon their agreement of service, they would also gain the abilities of speed and strength. Abilities to help assist them in their tasks.
Berith’s low growl snapped Renata’s head up, scattering her thoughts. She didn’t need to ask what agitated with him. By the way he stood ramrod straight with a far off look in his eyes, she knew he held a conversation with another in his mind. Only one female could cause him to look both distressed and fascinated all at the same time. A demoness, who happened to also be the bane of Renata’s existence.
“Oh just go to her, will you? We both know if you don’t then you’ll become even more of an ass than you usually are. I have to concentrate on this, and apparently you need to find a way to lock the demon-whore up so she isn’t a constant distraction.”
The way Berith’s eyes narrowed on her, along with the slow curling of his lip and twitch to his left eye, proved her assumption on whom he conversed with. He hesitated for a moment, as if trying to decide whether he should stay or go. Just as he turned to leave, he crossed over and knelt down beside her.
“Don’t mess this one up, Renata. Make sure she knows what she’s getting herself into. I would hope you have learned from past mistakes.”
Renata refused to acknowledge the statement. She always knew what she was doing. Swirling her finger around in the water, she watched as the images rippled amongst the waves. This one here would do just fine, and judging by the progress being made, the time to meet her newest slayer neared. By the bright yellow sun rising in the horizon, Renata knew the female’s time grew shorter. It wouldn’t be much longer before her final breath escaped her lips. Renata wasn’t heartless though, she mourned the loss of such a brave girl, but she knew the ugliness of death must take place in order for others to be saved. That was the motto of her slayers - to protect and serve those who could not protect themselves.