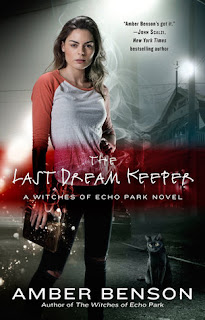 
In the second Witches of Echo Park novel, one coven must keep the world in balance and stand against a rising darkness.

Lyse MacAllister did not step into an easy role when she took over as master of the Echo Park coven of witches after her great-aunt Eleanora’s death. As she begins to forge the bonds that will help her lead her sisters, she struggles to come to terms with her growing powers. And she soon faces a deadly new threat. A group of fanatics intent on bringing about the end of times has invaded the witches Council—but the Council is turning a blind eye to the danger growing in its midst.

Only one witch is prophesied to be able to stop the encroaching darkness. And if Lyse and her blood sisters are to have any chance at protecting all we know from being lost forever, they must keep her safe—no matter what the cost…


THE LAST DREAM KEEPER was a nice follow-up to THE WITCHES OF ECHO PARK, but I am hoping that after the ending that book two gave us that book 3 will blow me out of the park.

There was a lot going on in THE LAST DREAM KEEPER and by the end there was a lot hanging in the balance. Some characters had tremendous development and some didn't have any. There was some betrayal, a shocking loss and a whole lot of danger. There were some slow parts and there were some parts that I felt went too fast, but I never wanted to put the book down and walk away.

It really sucked when THE LAST DREAM KEEPER ended. I have way too many questions and I don't feel like we got enough answers. The crap was hitting the fan and I really wanted to see what was going to happen next because I was honestly a little confused about a few things and the ending was so big you just couldn't help being a bit frustrated that it ended right where it did. I am hoping that Benson will blow me away in book three with answers and events. We shall see!