UFI welcomes Author Terri L. Austin. Thanks for Joining us!!

I have a snarky sense of humor, and I’m not afraid to use it.

I spend way too much time watching TV. It’s a problem. I also bead. (They’re so shiny!) And I love to read, natch.

I love getting lost in a different world full of interesting characters. I know I’m on the right track when I look up from my computer screen and it takes me a minute to figure out what day it is. I get pretty engrossed in my stories.

I do a lot of prewriting. I like to know my characters’ quirks and habits before I leap into a new book.

My two favorites will always be Karen Marie Moning’s Fever series, and Kresley Cole’s IAD series. Her Arcana Chronicles have me hooked, too. Lately, I’ve been devouring Kelley Armstrong’s Cainsville series. I’m losing sleep over that one.

How would you pitch Dispelled to someone who has not heard of it before?

If you’re into magic, mystery, humor and hot, hot romance, you’ll love it.

Can you tell us a little bit about the world that Dispelled is set in?

Set in Tulsa, OK, Dispelled is a world where Norms are kept in the dark about magical Others. My heroine, Holly James, rides the fence between the two worlds. She’s a null, sucking the magic from all spells, wards, and magical beings. But she’s found a way to profit from her gift. When Others need to suppress their abilities, they call on Holly. Shifter weddings, coven disputes, harpy baby showers—she’s seen it all.

Do you have a favorite scene in Dispelled?

When Holly has to team up with Cade McAllister, the sorcerer in charge of investigating the murder of two witches, he isn’t thrilled with her company. I’ll give you a little taste:

He stalked to my chair and towering over me, growled. He honest to God growled at me. “Jasmine True called my office and threatened to file a complaint against you.”
I gasped. “Oh no! Not a complaint.”
As his chest rapidly rose and fell, his eyes turned glacial. Danger: Thin ice.
“Fine.” I held up my hands in surrender. “I won’t talk to Jasmine anymore. Happy?” Besides, I didn’t think she had anything else to tell me.
It took a few seconds, but he visibly relaxed.  His lips tilted up ever so slightly at the corners. That passed for a smile in McAllister’s world. “Good. You leave the detective work to me. You’re not cut out for it.”
I blinked. Twice. Did the sorcerer just talk down to me? “You’re kind of a dick, McAllister.”

I wrote a series called Beauty and the Brit. Getting a British hero just right gave me a lot of joy, but it was a challenge because I wanted him to be as authentic as possible. In the Dispelled world, the characters just came alive. I lived in Oklahoma for a brief time, so it was fun to create a new reality there.

Terri L. Austin is a mild-mannered writer by day and a reality TV junkie by night. She lives in Missouri with her family, and loves to hear from readers. 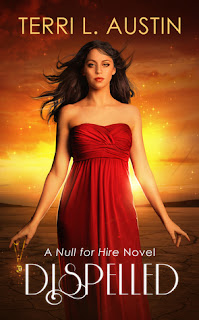 They call me an abomination. A mutant. A curse on their kind.

I don’t let it bother me. Much.

My name is Holly James, and what they say is true. I’m a freak of nature—a null. My mere presence zaps the magic from Others, rendering them powerless. That’s why they hate me. But here’s the kicker: I’ve found a way to profit from my lack of mojo.

Whether it’s acting as a mystical wet blanket in a dispute between pyromancers or keeping hormonal shifters from changing during a sweet sixteen party, I provide a highly specialized service. For a hefty fee.

When a young witch turns up dead, clutching an amulet cursed with black magic, my estranged grandfather asks for my help. In return for nullifying the necklace, Gramps promises to find my missing mother—a witch who vanished after my birth. Of course there’s a catch. He wants me to assist Cade McAllister, the arrogant sorcerer in charge of investigating the case.

Cade resents my existence, let alone my attempts to help. Still, I’ll do whatever it takes to find my mom. For my own peace of mind, I have to know what happened to her, and I won’t allow anything to get in my way. Not even this crazy, irrational longing I feel for a hot sorcerer with the sexiest scowl I’ve ever seen.