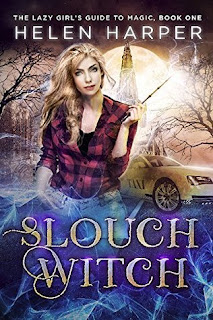 Let's get one thing straight - Ivy Wilde is not a heroine. In fact, she's probably the last witch in the world who you'd call if you needed a magical helping hand, regardless of her actual abilities. If it were down to Ivy, she'd spend all day every day on her sofa where she could watch TV, munch junk food and talk to her feline familiar to her heart's content.

However, when a bureaucratic disaster ends up with Ivy as the victim of a case of mistaken identity, she's yanked very unwillingly into Arcane Branch, the investigative department of the Hermetic Order of the Golden Dawn. Her problems are quadrupled when a valuable object is stolen right from under the Order's noses. It doesn't exactly help that she's been magically bound to Adeptus Exemptus Raphael Winter. He might have piercing sapphire eyes and a body which a cover model would be proud of but, as far as Ivy's concerned, he's a walking advertisement for the joyless perils of too much witch-work.

And if he makes her go to the gym again, she's definitely going to turn him into a frog.


The Lazy Girls Guide to Magic series is the third from this author that I have read and I am now convinced that I need to check out her backlist because I have enjoyed every story so far.

SLOUCH WITCH was a fun read. Ivy is HILARIOUS and her familiar Brutus made me bust out laughing quite a few times as well. Sure she could be a little lazy, but I could totally relate and get on board with her way of thinking.

The slow burning romance in SLOUCH WITCH was entertaining and dreamy at the same time. I really loved how Winter 'got' Ivy and vise versa.

I'm so glad I found this series after the first two books were out and was able to jump right into book two. Better yet, book three was released before I was done with STAR WITCH. If you're looking for a light and fun urban fantasy story with a little romance, you will want to pick SLOUCH WITCH up.