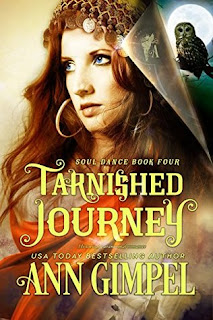 
Final book in the Soul Dance Series. Shifters, Romani, and Celtic gods engage in a desperate battle to save Earth from the vampires and demons that have signed on with Hitler's Reich. Steamy romance and violence. Over 18 only!

Long before Germany rounded up Romani and sent them to prison camps, the Netherlands declared them undesirables. Yara’s caravan disbanded when she was fifteen to avoid being driven out of the country. Ten years have passed, and she’s been alone for most of that time hiding in caves and abandoned buildings. It’s been a lonely life, but at least she still has one.

Stewart conceals his true identity for the best of reasons. He’s not actually Romani, even though he’s been a caravan leader for many years. In a bold and desperate move, he joins a small band of shifters and Rom to fight the Reich’s chokehold on Europe. When they’re crossing the border into the Netherlands, vampires attack.

Yara senses Romani near her cave. The stench of vampire comes through loud and clear too, along with shifters. While not nearly as bad as vampires, her people have always steered clear of them. Another type of magic plucks at her. She can’t identify it, but it draws her from her hiding place. That decision tilts her world on its axis when she comes face to face with Stewart’s raw masculinity and savage presence. She could still turn tail and run. If she stays, it doesn’t require magical ability to recognize her life will change forever.