UFI welcomes Author Claire Davon. Thanks for Joining us!!

People are really not going to believe this because I seem very confident in public but I get nervous going into new situations that I am unfamiliar with. Down to the parking. If I’ve never been somewhere and I don’t know people I stress about getting there in time, finding parking, finding where to go, who will I talk to, will it be uncomfortable, what if nobody likes me or talks to me, what if I bomb, or fail, etc. etc. I went to a convention by myself recently and spent the entire drive to the hotel talking myself out of turning around and going home.

I have very little down time. I have a demanding day job and between that and my writing and keeping up the necessary other components to being a writer I wind up not being encumbered with free time. What little I do have is either spent recharging or working with the local Los Angeles rescue group I am affiliated with.

Seeing my visions come to life. Often my work starts with a character or an idea and I have no idea where it’s going to go (I’m a punster) and so part of the fun is taking that journey with them.

I have to have quiet. I know a lot of writers have favorite playlists and/or songs but I can’t have music playing when I write. I think it’s because I love music so much that it distracts me if I have it on. I’m a fine multi-tasker but not when the tunes are on! Then I have to dance!

I adore Nalini Singh. Her worldbuilding is amazing and the characters she creates make me want to weep with joy. I also enjoy Patricia Briggs, Marjorie Liu and Seanan McGuire. When I first started reading paranormal after a long absence from romance (I KNOW! What was I thinking?) I devoured Sherrilyn Kenyon, Christine Feehan and Laurell K. Hamilton.

How would you pitch Air Attack to someone who has not heard of it before?

Imagine an unseen world where four powerful immortal Elementals must face off against their counterparts periodically. Win, and humanity is safe. Lose, and humans pay the price. In Air Attack it is the air Elemental Griffin who must face off against Amai-te-Rangi, his Demonos counterpart. With the help of a minor goddess who has a secret of her own, Griffin and Clea set off across Europe to seek out and defeat his foe. Their growing attraction hangs in the balance—Griffin has a secret of his own and one that will change things between him and Clea forever.

Can you tell us a little bit about the world that Air Attack is set in?

The Elementals’ Challenge series is in today’s world, but it’s a world where paranormal beings, including gods, fantasy creatures and shifters, exist but are not seen by humans. They are all around us but humans are unaware of them. We are incapable of seeing the beings but they exist. In this world the four Elementals, who are former humans now raised to the role of protector, each to its element (earth, air, fire, water) must periodically battle their Demonos counterparts. Win and humanity is safe. Lose and there is the possibility that the Demonos will be allowed to kill humans with impunity. The last great battle, called Challenge, which the Elementals lost, was World War II. They cannot let that happen again so when Challenge comes, they are determined to win. Little do they know there are forces at work that they are unaware of guiding their actions.

Do you have a favorite scene in Air Attack?

Griffin and Clea go to Luxembourg and stay in a nice hotel in Luxembourg City. Out of the blue a ghost character inserted itself into the story. There are a few scenes with this stuffy ghost who has haunted their hotel (in a gentlemanly fashion, of course) that were a lot of fun to write. This is where pantsing is fun. I had no idea the ghost was going to appear and yet…he did.

My favorite is probably Ondine, the water Elemental whose story is told in the third book Water Fall (currently being edited). Ondine was human up until ten years ago when the old water Elemental was killed under mysterious circumstances. She’s new to the Elementals and that feeling of uncertainty, of not being good enough, resonates with me. Hardest right now is probably Thomas, the mysterious ferrokinetic overall leader of Universe in the new Universe Chronicles series I’m working on. He’s a bit of a jerk. He’s one of those characters that you just want to smack but the organization couldn’t exist without him.

In addition to continuing to self-publish the other three books that will comprise the Elementals’ Challenge series I have also been signed by Soul Mate Publishing to release the first in a different paranormal series that we are currently calling The Universe Chronicles series. This focuses on people with extra powers and is set around a fictional government agency called Universe that recruits people with powers. At the moment it looks like the first book in that series will come out mid next year but I don’t have a date yet. In addition I also have many short stories that are coming out as they are accepted and I would like to get back to the Shifter Wars series at some point (so many ideas, such limited time). I also have a chapter a month in my newsletter of a story set in the world of the Elementals but isn’t about the Elementals.

Claire Davon has written on and off for most of her life, starting with fan fiction when she was very young. She writes across a wide range of genres, and does not consider any of it off limits.  If a story calls to her, she will write it. She currently lives in Los Angeles and spends her free time writing novels and short stories, as well as doing animal rescue and enjoying the sunshine. 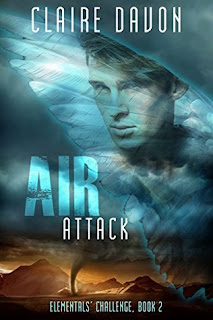 
The last time the Elementals were defeated in a Challenge, the result was World War II—a price humans paid in rivers of blood. Griffin is determined not to let that happen again. He doesn’t need a minor goddess getting in his way—no matter how much the redhead tempts him.

Clea intends to invoke a debt of honor to gain Griffin’s protection, but she has an ulterior motive: to get within striking distance of Griffin’s opponent, who she is certain killed her brother.

She never expected to feel a spark with Griffin, disturbingly seductive as he is. In a world where everyone looks like a god or goddess, why should this one winged Elemental call to her?

Yet their attraction grows fiercer as they journey to Iceland, Luxembourg, and finally Portugal to face Griffin’s foe. But even if they prevail, Griffin is holding onto one last, deadly secret that proves the truth can survive any Challenge, but love may be its final victim.

Currents of wind blew around and under them. Clea reached out to test the air. There was no need to supplement his gust with her own; he had more than enough. She cursed herself, wishing she had used her time to do more research before she had fled to the Elemental. She needed to know what Griffin’s strengths, and more importantly, what his weaknesses were. Only then would she know what to focus on and how she could help. She couldn’t lose any more family.
Inch by inch, her fear began to leave her as Griff’s strong wings beat in the currents. As they grew nearer, Griff again made the same hand motion he had before, and the sliding door pulled back.
“Neat trick.”
A rumble of laughter echoed in him.
He deposited her on the floor, landing her gently on her feet. Clea’s hands and face lost their chill in the warmth of his remote home. To her dismay, her heart was pounding and when cold left her, beads of fear sweat bloomed on her body. Griffin poured her another glass of wine from the same bottle as before, saying nothing. His wings once again folded against his back.
“That was interesting.” Small ripples danced across the red wine as Clea curved her free hand around the stem. In another moment, she would be shaking. Too much had happened too fast. “Why keep the basket?”
“He doesn’t need it to maneuver in air, but he likes to let the unwary believe what they will. Don’t underestimate Amai,” he said, steel in his tone. “The basket may look stupido, but he is ruthless and dangerous. He didn’t kill my predecessor by being a fool.”
Hoping her voice was level, Clea met Griff’s gaze. “I have learned not to misjudge anyone. Danger comes in many packages. Still, you’ve got to admit, it’s ridiculous.”
He flashed something that might have been a smile, but it was gone before she could be sure. “That’s the point. It’s a natural tendency not to take the ridiculous seriously, and he has caught many people by surprise that way. He was made into his current form by the primitive people of Mangaia, and he chooses to keep the trappings of his creation.”
Griff didn’t move, but he was in her mind, beating at her shields.
“Let’s talk, Clea. Who is Patrik?”
She opened her mouth to speak but before she had any words, there was a crack of thunder. It was followed by another one, and another, until their surroundings seemed alive with electricity. Clea’s hair floated out and Griffin’s feathers stood up. There was a fleeting impression of a hooked nose on his face, like a beak. For an instant, he looked like the half lion/half eagle that was his other form, before it faded to his normal countenance.
Wind kicked up and swirled outside the house, whipping small trees at the bottom until their branches bent close to the ground. It picked up snow, sending it coursing through the air, and bits of debris whirled in the currents. Griffin still hadn’t moved, cocking his head to one side.
“Amai’s parting shot. He can be a child,” he said. “I’ll be right back.”
Griff’s power grew, almost a tangible force in him as he took in a deep breath. When he exhaled, the wind stuttered and then stopped swirling. It began churning in the opposite direction, rising away from the house. Lightning streaked down, but before it could crash to earth, Griffin caught it mentally and sent the electricity back up the path it had followed, lifting his hands as if to direct the path. In the distance, Clea heard a yelp before the storm ended as fast as it had manifested.
The buzz in her body subsided. There was no need for it yet. It may be best to keep her powers hidden until she had need of them. Amai was not the only one people often underestimated.