UFI welcomes Author Beth Woodward. Thanks for Joining us!!

One morning you wake up. The birds are singing, the sun is shining, everything is wonderful…and then some strange guy comes into the bookstore where you work and tells you that you’re half demon. That’s pretty much what happens to my protagonist, Dale, in The Demon Within.


I mean, you could scream or cry or go see a therapist (who will probably have you committed). But, this being 2018, I think there’s only one correct answer: you go home and built a Spotify playlist.


And thus you have the “So I’m a demon…now what?” playlist.

I mean, this is kind of a gimmie, right? So what that you don’t actually know whether demons come from Hell. Neither do any of the other demons! But that doesn’t prevent them from grooving out to the music that honors their “heritage.” Also, it’s loud enough to block all those thoughts in your head who are screaming at you that you may just be evil now.

Thankfully for you, none of the demons in my world are cannibals (that we know of). But in those initial hours after finding out, you may start to wonder whether Hall & Oates seminal tune and the sixth-best karaoke song in existence will start to sound a little more literal to you.

…Or maybe new demon-you will end up doing something horrible, like murdering your poor girlfriend (who is, naturally, named Annie) in a fit of rage.

…Or maybe you’ll just start robbing and killing people because you think it’s fun, like ol’ Mack the Knife. And honestly, it must be kind of fun, otherwise Bobby Darin wouldn’t sound so peppy when he’s singing about Mack, amiright?

Oh no. There will be no knocking on Heaven’s door for you…and even if you were to knock, you’d be rejected…because you’re a demon! When it comes to Heaven, you’re like that solicitor who knocks on the door at 8 a.m. on a Saturday morning. Unless you come bearing Girl Scout cookies, you’d better get the hell away.

By this time, you’re probably feeling pretty down on yourself. But don’t worry—you’ve got Radiohead’s “Creep” to keep you company, the seminal song of angst and self-loathing. You will play this on repeat for a while, because you are (in your mind) both a creep and a weirdo.


7) Charlie Daniels Band, “The Devil Went Down to Georgia.”

But maybe, after much wallowing, you’ll start to think about the bright side of being a demon. Like for example, we all know that the best part of “The Devil Went Down to Georgia” was the hip backup band of demons that the devil summoned to accompany his fiddle-playing. They had a good beat, and you could dance to them. Johnny schmonny! #thedemonswererobbed

Being half-demon comes with a few perks. Like immortality. And SUPERPOWERS! Hey, maybe it isn’t easy to be you, but buck up: it’s a lot easier when you can fly, walk through walls, free time, or—like Dale—can control minds. Hmmm, that one would definitely be interesting…

Being a “monster” is in the eye of the beholder. And maybe it’s easier to be a monster (or a demon) when you have your whole tribe around you, doing the Transylvania Twist. Dale’s had a few problems with that one, being a loner who spent 10 years on the run. But by the time we get to Embracing the Demon, Dale is well aware of her demon heritage. So maybe it’s time she finds a few like-minded monsters to mash with. (Also, this video is worth your time just to check out the crazy facial expressions!)


10) The Rolling Stones, “Sympathy for the Devil”

Of course, this is the song that would close out your playlist, because it’s all about how evilness is relative—after all, “every cop is a criminal, and all the sinners saints.” It’s easy to put a label on something. But sometimes in real life, things escape easy categorization—like when you’re a demon who really wants to be a good person. When you’re half demon, it’s much easier to have sympathy for the devil. Maybe you both got assigned labels that don’t quite fit. 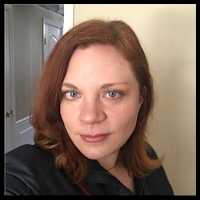 Beth Woodward has always had a love for the dark, the mysterious, and all things macabre. She blames her mother for this one: while other kids were watching cartoons, Beth and her mother were watching Unsolved Mysteries together every week. She was doomed from the beginning. At 12, she discovered the wonders of science fiction and fantasy when she read A Wrinkle in Time, which remains the most influential book of her life. Growing up, she was Meg Murray with a dash of Oscar the Grouch. She’s been writing fiction since she was six years old; as a cantankerous kid whose family moved often, the fictional characters she created became her friends. As an adult, she’s slightly more well adjusted, but she still withdraws into her head more often than is probably healthy.

When she’s not writing, Beth volunteers at her local animal shelter, attends as many sci-fi/fantasy conventions as she can, and travels as much as time and money will allow. She lives in the Washington, DC, area with her husband and their three cats. 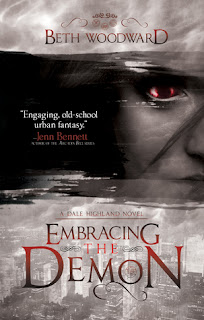 A militant anti-supernatural group called the Zeta Coalition is trying to kill Dale, and a mysterious illness ravages angels and demons throughout the world. As the death toll rises, and the Zetas get closer and closer to Dale, she starts to realize the two things are connected.

To save them all, Dale will have to team up with John Goodwin, the man she once loved. The man who destroyed her.

But by the time Dale and John figure out the Zetas’ real intentions, it may be too late…

He wore a gray suit with a dark shirt and a blue tie that fit him so perfectly I knew it must have been custom made for him. His dark blond hair had been combed and gelled into submission. Normally, it stood up in random spikes around his head—not as a stylistic choice, but because he had the tendency to run his fingers through it nervously until it went in about 14 different directions.
Until that moment, I hadn’t been convinced he’d survived the fall off the roof of Amara’s estate. Every night in my dreams, I stared at his broken body, tears running down my face. I wasn’t sure why I cried: because I had killed him, or because he had destroyed me.
But here was John, very much alive, looking like the fantasy of some billionaire boss about to have hot monkey sex with his secretary on the desk. He didn’t look like the John I remembered, who’d spent most of our time together wearing blood-covered t-shirts. Which one was the real John, I wondered, the suave businessman or the urban warrior? And then I noticed the pin on his lapel: a flaming angel that matched the ones on the others’ pendants. John had declared his allegiance, and it wasn’t to me.
“My apologies for the mess,” he said. “Ephraim, Leah, please clean that up. Make sure you dispose of the body well. I don’t want him coming back to haunt us one of these days.” A man and a woman jumped out of their seats and scooped up the body, leaving just a puddle of blood behind. Guess they’d be getting that later.
John turned to the rest of the group. “Let’s not forget why we’re here. This illness is already devastating our community, and it’s getting worse. The Zeta Coalition created it with the intent of wiping out supernaturals—angels and demons. And if we can’t cooperate, they will succeed.”
“She’s the daughter of our worst enemy!” someone shouted.
“Amara is dead. And Dale is not Amara.” He paused. “Covington is right. We need more information if we’re going to survive this, and Dale is our best hope of gaining access to their records containment facility.”
“What about taking an army and storming the compound, like we talked about a few weeks ago?” someone asked.
To my surprise, it was Tina who answered. “The compound is too heavily fortified, and its underground architecture would make it difficult to strong-arm. We’ve run the scenario many times, accounting for the different variables. The most likely outcome is that we’d end up trapped down there while the Zetas pick us off.”
“There must be another way,” a woman said.
“Maybe, but this is the best way,” John replied. “We all know Dale can do things that no one else can. Her return may have been a coincidence, but we should use that to our advantage.”
“I haven’t agreed to anything yet,” I managed to get out through gritted teeth.