UFI welcomes Author Ella J. Smyth. Thanks for Joining us!!

Hi there! My name is Ella J. Smyth and I write Urban Fantasy romance. Today I’d like to talk about how I create my characters.

How do you come up with your characters?

When I begin to work on a new concept for a book or a series, the first thing I do is create a Pinterest board. I generally have a rough idea about the characters and what they should look like. My first question is always, “If somebody made a movie out of my book, who would they cast in the lead roles?”

I knew right from the start that my male protagonist Honiahaka Clearsight Fisher would have to be played by Native American model Martin Sensmeier. Honi is gorgeous with black eyes and hair, calm, rational, in control. Well, until he meets Adi (no spoilers!).

His female counterpart Adi Gutseel needed to be a bit of an ugly duckling. A girl that might look plain compared to the made-up, coiffed beauties we see on TV daily. Yet Adi is incredibly gorgeous in her own right. She is smart, brave, ornery, and Honi falls for her very quickly.

One night while watching House of Cards, I saw my perfect Adi. When I googled Kate Mara, I found photos of her without makeup in a ratty old hoodie. She was Adi, through and through.

Why is it so important to have images of my protagonists? I’m a very visual person. I write with photos of my casting choices open in my document. That way I can refer back to them, making sure I don’t change eye color from one chapter to the next, for example.

Sometimes when I don’t know which way to take the plot, I stare into Kate Mara’s eyes and imagine what Adi would say. It sounds weird, but somehow, giving my brain some concrete image to latch on to, really helps with exploring my characters and getting to know them better.

At the end of the first book, Adi and Honi were like best friends to me. I knew them. I knew their backstory. I knew their wishes and dreams and fears and struggles. That’s the point you need to get to as a writer. Once your characters are more real to you than some of your actual friends, you know you’ll write a good story.

Growing up in Germany, Ella always had a passion for myths and fairytales. No surprise then that she married an Irishman and lived 6 years in Ireland, the country of Leipreachán, Sidhe, Púca and other fascinating creatures. There's nothing like walking at night through a deserted laneway, fog swirling around your feet, knowing that maybe, just maybe, on the other side of the hedge, there might be some old lady in a black cloak waiting for you...

If you got the shivers right now, you know why Ella feels compelled to write stories around the supernatural and paranormal. There's nothing like a delicious shudder making you enjoy life just a little more... Plus she’s a romantic.

So look forward to modern romantic stories set against the background of ancient myths and legends. Ella hopes you enjoy reading them as much as she enjoys writing them! 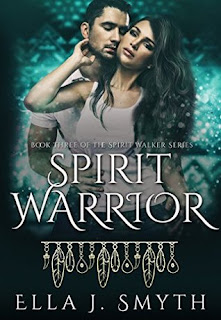 Adi and Honi journey to Southern Oklahoma to meet Honi's Mekui'te tribe at the reservation where he grew up. Honi's infectious excitement almost erases Adi's apprehension at meeting his family, and she's desperate to make a good impression.

When Adi is met with silent hostility that gets worse rather than better, she realizes there may be more to the initial resistance Honi had warned her to expect.

Honi is confused and hurt by his family's reaction, and by Adi's increasingly strange behavior. She's claiming the spirit animals of his tribe are diseased and sickly, but they look just fine to him. On top of that, when Adi meets Honi's ex, Nina, her jealousy gets way out of hand, and threatens to drive them apart.

While mysterious forces manipulate and distort their realities, can Honi and Adi join forces to figure out what is happening before it's too late and they are separated forever?

Find out in the third full-length novel in the Spirit Walker series!