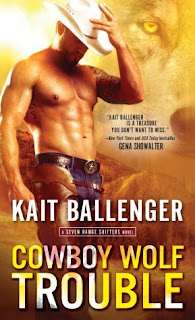 But a new evil will stop at nothing to tear their world apart.

For centuries, the shifters that roam Big Sky country have honored a pact to keep the peace. Even bad-boy rancher Wes Calhoun, former leader of a renegade pack, has given up his violent ways and sworn loyalty to the Grey Wolves. But his dark past keeps catching up with him…

Human rancher Naomi Evans cares only about saving the ranch that was her father’s legacy. Until a clash with Wes opens up a whole new world—a supernatural world on the verge of war—and Naomi, her ranch, and the sexy cowboy wolf stealing her heart are smack dab in the middle of it.

“You slaughtered my livestock.” Her voice was feminine, but deep in a way that stirred low in Wes’ belly. To his ears, the noise sounded incredibly human and unintimidating, yet it raised his hackles. For a woman whose life he’d spared, then saved from the hands of the Wild Eight soon to be prowling her lands, her thanks had been shooting at him and now blaming him for petty ranch theft.
“I didn’t kill your livestock.” Slowly, he pushed into a plank position above her before he stood. He’d take his chance with her running again if it meant escaping the hazy fog her scent flooded over his brain.
She scrambled to her feet with some complication considering her hands remained bound. Her full lips pulled into a scowl. “Evidence says otherwise. After all, you were the one in the trap not far from the sheep’s pen. Not to mention, I smelled it on you just now.”
“Trust me, sweetheart, if I wanted a mutton steak, I’d take a chomp out of my pack’s flock.” He didn’t know which bristled him more, the accusation that he’d murdered her flock or the fact that she implied he smelled like the inside of a barn. Which he likely did at the moment, considering he’d spent the morning herding a couple hundred of the Grey Wolf calves into the barn so they could begin preparing to take them to market soon, but that was beside the point. “If it’s the blood you’re referring to, that’s the blood of my enemies. Not your precious lambs.”
She struggled with the bindings at her wrists, attempting to remove them to no luck. “I won’t take your word for it.”
“You’re a feisty one, huh?” He shook his head. What the hell had he gotten himself into? She was a pistol, and he liked irritating her. Every time those gorgeous brown eyes blazed in challenge his head filled with naughty thoughts. He’d always had far too much appreciation for feisty women.
“If you wanted cooperation, maybe you shouldn’t have abducted me from my pasture.”
“You had a gun to my head,” he said.
“You ate Lambie,” she countered.
When the frustration on his face made it clear, he had no clue what she was blabbering on about, she sighed. “My sheep,” she elaborated. “A wolf has been killing them. My guess is that’s why I caught you in the trap my idiot brother set.”
“You name your livestock?” His gaze swept over her. From her faded jeans, cowgirl boots, and the worn overlaid suede jacket, she looked as if she knew her way around the ranchlands. Ebony hair, dark skin, and sharp sculpted cheeks, said she was Native American. Thanks to the language she’d muttered earlier and considering their proximity to the reservation, he guessed Crow Tribe. Crow Agency was only a few hours drive from here.
“Just one: the sheep that you slaughtered two weeks ago. His name was Lambie, and he was a sweet, gentle yew. My father gave him to me when I was ten. The only thing worse would’ve been if you killed our family ranch dog, Blue. You’re lucky he’s with my brother right now or he would have taken a good chunk out of one of your back legs.”
Wes stared open-mouthed at the woman before him. He wasn’t even sure where to begin.  Who did she think she was, Little Bo Peep? Call him ignorant, but as far as he knew, no rancher in their right mind named their flock like they were house pets.
When he’d been stuck in her trap and she’d stared down at him in wolf form, apologizing for holding her gun on him, he’d imagined the Wild Eight wolves turning around in search of him, but instead finding her and something inside him had snapped. In that moment, he’d been back there again. The memory shook him and he’d imagined himself in that godforsaken bedroom, blood dripping from him and an innocent woman...
He closed his eyes, and released a long exhale. He hadn’t been able to bear the thought.
So he’d shifted in front of her. Pack law be damned. He’d done it both because he had no other way to escape the trap he’d been locked in—not without opposable thumbs—and also to warn her. The Wild Eight were bound to circle back looking for him, and with their blood pulsing from the night’s battles, if she managed to get in their way, an innocent human female like her would serve as nothing more than a bloody diversion to them. He knew they weren’t safe. Not even now that they were hidden in the forests of the Grey Wolves territory again.
She was a stranger to him, but he wouldn’t allow those monsters to kill another innocent. Though he should have taken her life as pack law dictated when she’d laid passed out in front of him, he couldn’t bring himself to kill an innocent. Not again.

ROMANCE AUTHOR, WORLD TRAVELER, ENGLISH PROFESSOR, AND FORMER PROFESSIONAL BELLYDANCER, Kait Ballenger hated reading when she was a child, because she was horrible at it. Then by chance she picked up the Harry Potter series at the age of eight, fell in love with reading, and never looked back. When she realized she could tell her own stories, the deal was sealed.
After stints working as a real vampire (aka a phlebotomist), a bingo caller, and a professional bellydancer, Kait finally decided that her eight-year-old self knew best: Kait’s meant to be a writer...though the jury is still out on being the next J.K Rowling.

When Kait’s not preoccupied with writing captivating paranormal romance, page-turning suspense or love scenes that make even seasoned romance readers blush, she can usually be found spending time with her family or with her nose buried in a good book. She lives in Florida with her husband and young son.

And yes, she can still bellydance with the best of them