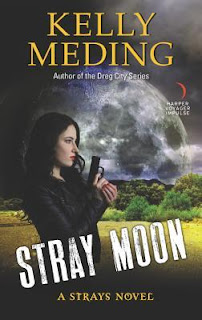 Para-Marshal Shiloh Harrison has always been a great number two for the East Coast unit. But after her boss is found dead (having betrayed the paranormals he was sworn to protect), she’s suddenly thrust into a leadership role she isn’t prepared for. And it doesn’t help that she traded away memories of one of her most important team members to save another’s life during her last mission.

Too, she’s in charge of a unit that is mired in bureaucratic red tape, meaning she’s essentially under house arrest. But a West Coast Para-Marshal has astral-projected a warning: werewolves are going missing, and she needs Shiloh’s help. Last time it was vampires. This time it’s werewolves. Half-djinn herself, she knows she can’t just sit around and do nothing while paranormals are getting snatched. Her old boss may have broken his oath, but Shiloh will do anything to serve and protect.


The East Coast unit of the Para-Marshals went through a lot in STRAY MAGIC. Their team is no longer whole, but when they find out that werewolves are going missing Shiloh is determined to help.

There was a ton of mystery going on in STRAY MOON. I enjoyed all of the investigating aspects of the storyline. Shiloh—and her mother— get a pretty big shock when their connection to the bad guy is revealed. I didn't see it coming either.

There really isn't any romance involved in STRAY MOON, but the connection between Shiloh and Jaxon grows as she slowly learns about the connection that they lost when her memories were taken. I'm still really confused about Tennyson. Sometimes I feel like there is a small romantic connection between him and Shiloh and then other times I just feel a sort of sister/brother protection vibe happening. Either way, they work really well together and I hope he continues to want to tag along with her and her team on future adventures.

There was plenty of action, the world building continues to grow the world and the characters continue to entertain and intrigue me. The Strays series will continue to be on my wishlist.