I’m always getting recommendations for books and series from my readers. So, here are my top five must-read books/series, in no particular order.

If you’re looking for more werewolves: Check out the Mercy Thompson series by Patricia Briggs. There are eleven in the series so far, and I just looooove Mercy. She’s not a werewolf, but a skinwalker-coyote. She was raised by a pack of werewolves, and lives next door to a very handsome one… It’s adult, so for younger readers, might not be a great fit, but mostly because of fighting big, scary bad guys.

If you’re looking for more magic: Check out the Sword of Truth series by Terry Goodkind. They’re the doorstop type fantasy books (ala George RR Martin), but the series is complete at 13 books. Kahlan Amnel is one of my favorite strong heroines.

If you’re looking for more fey: Check out Sarah J Maas’ Court series. And if you’ve already read those, check out Holly Black’s Tithe or Melissa Marr’s Wicked Lovely. Maas’ are a new favorite and Black and Marr are older releases, but worth checking out if you haven’t already.

If you’re over 18, and looking for more romance and magic: Check out Christine Feehan’s Sea Haven: Drake Sisters series. It starts out with a novella, but each of the seven witchy sisters get paired off in this paranormal romance series.

If you’re over 18, and looking to be transported to a world filled with magic and witchcraft: Try Anne Bishop’s Black Jewels Trilogy. It’s a little graphic for younger readers, but the world building is amazing and her magic is really fresh. I read this series in high school as it was releasing, and I looooooved it. I’ve re-read it countless times. She’s recently been releasing a new urban fantasy series (Written in Red is the first in the series), but this Black Jewels fantasy trilogy of hers is still my all-time favorite.
__________________________________ 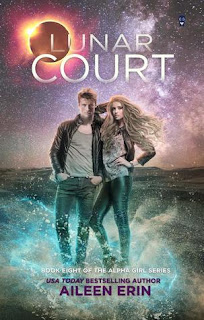 Fun. Funny. Lighthearted and sweet. Chris always manages to find beauty and laughter, even when fighting a chapel full of demons. He's exactly what she needs. Except he's a werewolf and she's a member of the Lunar Court — the only fey court that holds sway over the werewolves. Even on his best day, Chris isn't strong enough to last a few hours in the Lunar Court without becoming a slave. No matter how much Cosette's heart wants him, she knows she has to let him go.

But when Chris goes missing, Cosette realizes how much she has to lose if the worst happens. Except her mother — the Queen of the Lunar Court — won’t let her go after Chris. Being forced to stay at court is dangerous for Cosette. Assassins keep coming after her, and unless she accepts a mate, it’s only a matter of time before one of them kills her.

Cosette is the girl Chris has always dreamed of.

Chris sees through the tough facade to the girl exhausted from a lifetime of fighting off assassins and court politics. She needs a true friend, someone who she can be herself around, and craves solitude. The same solitude that Chris craves. But he knows he'll never be enough to survive in her world. So, when Eli — a mysterious archon — requests his help, he figures why not? The guy might be a little shady, but he needs every distraction he can get.

But when Eli says that Cosette’s in trouble, Chris is more than ready to play by Eli's rules. At least until Eli takes him to the Court of Gales. Chris knows he’s about to play a very dangerous game. Bargaining with the fey is something only a desperate person would do. But what wouldn’t Chris give up to save Cosette’s life?

"These books go by so very quickly, with the pacing making me think I just started reading. I could gobble up a dozen of these novels!” – Carrie Reads a Lot

"Aileen Erin: You did a great job as usual and I’m so excited for Invocation and Lunar Court.” - Lenniland